We Are Hard Left 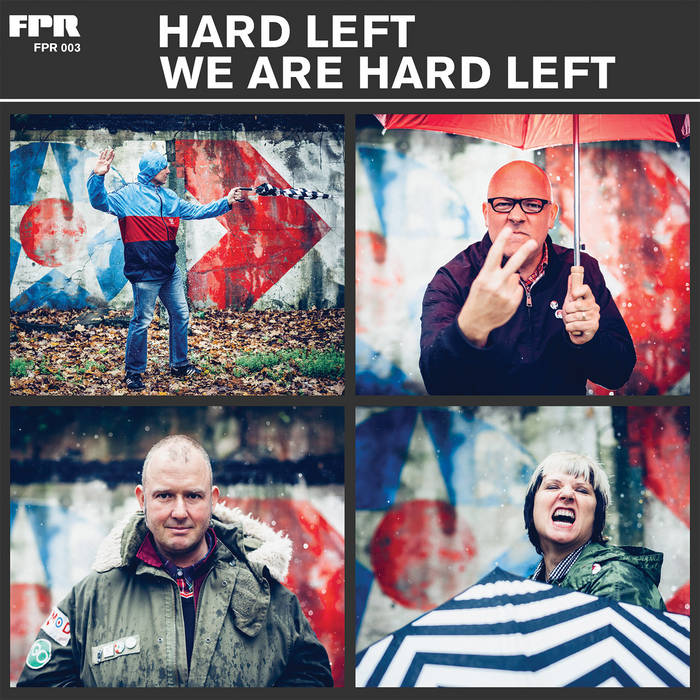 East Bay Working Class LOL....the band and I might only agree on labor issues,lol...I dunno,but THEY HAVE A REALLY GREAT SOUND. I love the hardass/ gruff vocals paired with incredible melodies. Just really awesome sounding stuff that is mindful of the working class and issues pertaining to labor. Stumbled on em by accident and just dug the sound. Favorite track: Hand In Hand.

"We Are Hard Left" is the debut album from Hard Left. Brought together by the music, held together by the outrage -- Hard Left are a hard-mod/punk band borne out of a desire to explore leftist political ideas and marry them to rabble-rousing music worthy of the worldwide struggle against capital. Far from a dry exercise in doctrinaire thought, Hard Left's songs are great punk first and foremost, and ripping good fun.

The band members have been involved with punk and DIY music for nearly a century combined, including time in bands like Boyracer, Jüke, Whorl, Lunchbox and Black Tambourine, and operating the respected labels 555, Emotional Response and Slumberland Records. Initial Hard Left recording sessions in Spring 2014 led to the release of two limited edition lathe-cut singles, the Situationist-inspired "What's That Sound?" and the tough-as-nails "Safety." The band set to writing and in August 2014 gathered in the desert of Flagstaff, AZ to record. The results were two more singles ("Skinheads Home For Christmas" and a split 7" with Bad Daddies, both released in December 2014), and now this album.

"We Are Hard Left" is a concise and explosive punk record, packed with anthems of resistance and calls to action. These are crucial times that we live in, and Hard Left seek to inspire and invigorate. The opener "New Year" sets out the band's stall in fine fashion, urging listeners to "give up false needs" and embrace new beginnings. They follow with the blasting "Hard Left Rules OK," a call to arms if ever there was one. The album is tightly edited, each song on the heels of the previous one, exemplifying the group's eagerness to broadcast their message and energize their fans.

To that end, rousing chants and noisy interludes are interspersed throughout, cheeky but pointed references to their mod forebears and street-level terrace "politics." The message is always positive, the underlying mood is of hopefulness. "Hand In Hand" is an exhilarating call for solidarity and collective action, while "Future Perfect" imagines a world where the people were the true beneficiaries of the surplus created by progress, the perfect future we were all promised during the golden age of capitalism. Previous singles "Safety" and "Stay True" appear in re-recorded form, hard as nails and fitting in perfectly.

From the super-tough "Kicking If Off" to the Occupy-inspired "Red Flag" and the supremely uplifting (and also Situationist-inspired) closer "Imagination," this is a record that hits hard, crammed with guitars that soar and rage, group chants and raw-throated vocals. It's anthemic in the best way -- inspiring but never heavy-handed, a worthy successor to records by bands like The Clash, Stiff Little Fingers, Sex Pistols and The Dils. Call it "utopian Oi" if you will, or "hard mod" or just plain punk, but don't miss out on this passionate, thrilling record.

This is Future Perfect Records 003.

Hard Left is a political punk band inspired by liberatory leftist movements of the past and present. Our music is a soundtrack for direct action, an invitation to critical thought and a challenge to complacency. We privilege the "we" over the "I" and argue for the centrality of class struggle in our collective battle against neoliberalism, authoritarianism and imperialism. ... more

Track Name: New Year
Boy, did you hear?
There’s nothing to fear
This ship is ours to steer
It’s only new year

Girl, did you hear?
There’s nothing to fear
The news has gone away
The shops are all closed, today

No more being scared, and no more acting tough.
no more dreams of servants,
no more being bluffed

There’s nothing to lose
Nothing in the way
Give back their dreams
Cause they’re nightmares anyway
The world that you know - Was a long time ago
There’s nothing to fear - It’s just new year
Track Name: Hard Left Rules OK
Danger’s calling, rebels don’t flinch
Shoulder to shoulder, we’re in the clinch
Hard Left rules OK, rules OK

Read up comrades, analyze the past
Future perfect is coming fast
Facing the facts, we ain’t got no choice
We’re Hard Left, we’re the people’s voice

On your private island
Utopia at last
No one there to build it
And the water’s rising fast
But there’s nothing we can’t do
If we stay true
Track Name: Kicking It Off
Making do with what we didn’t choose
We can never lose
Now we’re international

Comrade do you hear the sound?
We’re kicking it down to the ground

Don’t talk back or you’re down on a list
Accidental death of an anarchist
Force your smile and clench your fist
Your freedom, comrades, depends on this
Safety!
You’ve got more than you can use
Safety!
They’ll be happy to choose for you

There is such a thing as society
Society is you and me
It's not measured in profit and loss
My profit is not your loss!

Don't run, 'til the victory's won
What you want done
We gotta make it happen

Don't pretend you've got nothing to do
There are dreams for you
Make them true
Track Name: Holiday
It’s a holiday
It’s another day off
it’s a gift of time
For when you fall behind

It’s a holiday
All mod cons we’ve got a lot
They didn’t give it to us
It’s what we fought for and got
No one knows, we don’t count the cost
They can’t find us
We were never lost

Bandcamp Daily  your guide to the world of Bandcamp

Guests include Kassa Overall and Muriel Grossman, plus an LP of the week by Van Hunt.